A Day in the Life of Birds

Today seemed to be national flying day for newly hatched birds. While one of the blackbird chicks was taking bold flying lessons across the garden under the watchful eye of it’s mother, calling it from one corner to the other, the second chick was toppling around on the ground, momentarily getting caught in the netting over my veg patch, jumping around in the bushes in a desperate attempt to get up higher while Daddy Blackbird kept looking for food, pulling up worms from the ground, like there was no reason to worry.

Can you spot it? Right in the middle!

At some point they must have lost their chicks because the proud parents were yelling on top of their voices. A little while later the clamour started to get even louder when a crow positioned itself on top of the electricity line. When it jumped down onto the tree, accompanied by both loudly protesting blackbirds, I felt the need to intervene, marched into the garden, putting up a bit of a protest myself, and chased the crow away. A big rustle in the bushes revealed another crow and fearing it was about to eat one of the blackbird chicks, not sure they would do that sort of thing, I was about to start shaking the bushes when I noticed that it was also a young crow, just as clumsily trying to get up on top of the bushes. And while a big crowd of crows formed above me I wisely decided to withdraw and let nature have it’s way not risking having my eyes picked out. 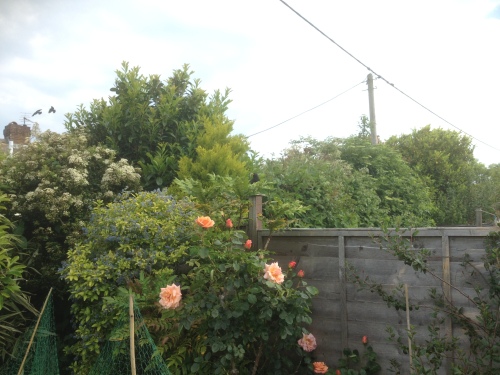 A few minutes later the noise was picking up again and I came just in time to see the baby crow land in the netting around my veg patch in a desperate attempt to get away from two vicious blackbirds angrily picking on it. After a successful rescue mission equipped with a towel, the baby crow was tossed up into the air and manage to fly to safety, whereas the blackbirds didn’t seem too impressed with me taking the enemies side. Still no sight of the blackbird babies since the morning.

I saw it again, later in the day, INSIDE the netting of my veg patch, together with it’s dad. Just how they got themselves in there I don’t know. So off I went unravelling the netting so they cold escape, which they did rather flustered and the baby blackbird settled on a branch, where it spent the next 20 minutes as if unsure of what to do next.

What it must be like to be a bird, I don’t know, but it is rather entertaining when one has nothing better to do on their holiday than sit in the garden and watch them. Though it becomes even more interesting when you begin to understand what the birds are actually saying 😉