I like the idea of reincarnation, life as a cycle of learning, dying, being born again, living life as a quest to fulfil a deeper understanding which lays beyond our comprehension.

These two are worlds apart, one might think. The idea of incarnation seems to be attached to a belief system, religion, an airy gist of a thought manifestation that somehow made it into present history as a possibility, though commonly established in Eastern traditions.

Genetic research seems to follow a set of rules that are based on material evidence found over the years. However, even genetics had to prove itself against an array of scientists who didn’t “believe” what the latest discoveries showed and only gave in when many others showed equal results.

Both, incarnation and genetics, could be put down to evolution, the constant evolving of a species that is at the same time spirit and flesh, yet haven’t come to fully see the connection between both.

A question that arose while I was looking into my own mitochondrial past was if we would possibly reincarnate into the same haplogroup, a group that consists of people with the same genetic mutations in their mitochondrial DNA, which is only passed along the maternal line.

Why did that question arise? Because for me, considering that one is said to evolve with each incarnation and to possibly be reincarnated with similar people, it would make sense to stay in the same clan, to move it forward, mentally driven by spiritual aspects and physically by carrying forth our genetic blueprint, using our common mutation for the better of humanity.

To be fair, I haven’t got a clue what I am talking about, mere speculations, yet the topic doesn’t let me rest. So excuse my waffling, but I have got to find a common ground here.

Another question: “How much do genes remember of themselves? Do they have a collective memory or conscience/awareness like we are said to have?” Spiritually it is suggested that we are all one. One soul, split into different segments to enable incarnation, to learn for the better of the whole.

Have you heard about the joke with the Dalai Lama and the Pizza? Got to watch it! 🙂
http://youtu.be/BNw_eeH2Tp8

Atoms, for example, tiny tiny particles, together, vibrating at different speeds, create a material object. Though even for atoms to be acknowledged by humanity took almost 2000 years since their discovery approximately 400 BCE by Democritus, a Greek scholar, Back then, his idea was refused as one saw the world as something divine, whereas today we have gone the other way, accepting only what can be proven by science. 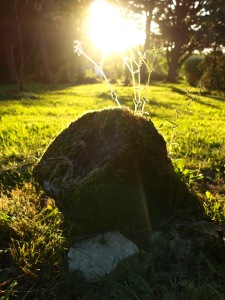 “It only looks like a thing has a colour and it only appears to be sweet or bitter. In reality, there are only atoms and the empty space”. Democritus

According to Paul Davis in “The fifth miracle”, every human has about one billion atoms in their body which once belonged to Shakespeare or even Buddha or Mozart. He claims that due to the constant circle of life and the apparent long-living atoms, a permanent new use as a dewdrop, leaf or new human is possible.

Bryan Sykes completes his book “The seven daughters of Eve” by stating that our genes didn’t just appear when we were born. They have been carried to us by millions of individual lives over thousands of generations. And even though we are all a complete mixture, at the same time, we are all related. Each gene can trace its own journey to a different common ancestor.

Just how much do I have in common with my ancestors?

2 Comments to “Incarnation vs Mutation”